Tyrion is aboard the Salaesori Qohan, a trading galley on the way to Qarth, and watches the evening prayer led by Moqorro, a red priest from the Summer Island's and Benerro's right hand. He was sent along with them to go to Daenerys and teach her the ways of R'hollor. Penny, the dwarf girl they encountered in Volantis, is with them as well, but fleeing the sight of Tyrion the instant she sees him. After the prayer, Tyrion goes to Moqorro and talks to him. Moqorro claims to have seen dragons in the flames, clear sign of Dany whom he calls "the Deliverer". After that, their talk goes over to the name of the ship. It actually means something like "flagrant steward", which Tyrion finds rather amusing, who dubbes the ship "stinking steward" after that.

After his encounter with Moqorro, Tyrion talks to Ser Jorah, who is hard and without humor as ever. He tells him that Penny is in danger of killing herself, but Jorah tells him that she is his problem, since it's Tyrion's fault and he insisted on taking her with them. Jorah then walks off, and Tyrion muses about his character, concluding that it's no person at all he likes. He is bored to death on the ship, and his mind wanders. Oftentimes, he experiences bad dreams at night, and he compensates the boredom with plenty of food. The captain of the ship owns three books, which Tyrion has read several times over by now.


By chance, he comes up with Penny again, who seems to have gotten herself together a bit. They talk about the wedding at King's Landing. Penny accuses Tyrion of being to proud to be laughed at, which would have saved them all, and Tyrion can't help but ponder the thought. She then tells him that she and her brother left the instant after the jousting event in fear of retribution, going to Tyrosh, where Cersei's thugs had gotten already unforunately. They killed a dwarven juggler for his head, and so the two fled to Volantis. Her story makes Tyrion overthinking his own identity as a dwarf, concluding that he doesn't want to embrace it like Penny does but rather stays himself.

When a storm hits the ship some hour later, Tyrion stumbles into Penny again. This time, they talk about Penny's past, her upbringings as a mummer and her fate so far. She tells Tyrion that a man named Osmund hired her, not Cersei as Tyrion suspected. Penny gets delighted by her own profession and talks to Tyrion about the merits and function of the jousting on pig and dog, and how you work with the audience. Tyrion assures her that Dany will like the show to please her, and Penny offers him to tilt, which Tyrion brusquely denies.

When Tyrion emerges on deck again, the moon is hanging in the air red and swollen, enormous to behold. Moqorro tells him that the moon is always like that over the Smoking Sea, which leads Tyrion to wonder whether Valyria got what it deserved. He also remembers his uncle Gerion, going on a "fool's quest" to Valyria, and how he wanted to go with him and how his father forbade it. Moqorro then tells him of a vision he had, of a big one-eyed shadow with ten long arms sailing a sea of blood.

It is not at all difficult to read into the chapter that the shadow seen by Moqorro is Euron Greyjoy, being not only a kraken by the sigil of his house but also one-eyed and sailing for plunder and murder. The question is more what conclusion Moqorro draws from that, but there isn't any inclination. Moqorro will later end up with Victarion, so perhaps he reads the vision as a sign that he needs to help the Iron Captain to shake off the shadow of his brother, which he does. There is a mystic aura about the black red priest, that's for sure.

It also remains to be seen in a future book how Dany will react to the cult. Until now, she doesn't strike me as a very religious person no matter what religion it is, but she will certainly be open to the explanations the red priests offer, and of course the support they give her. Since we don't know what Moloqqo plans to tell Dany, we can only assume about the prophecy of Azor Ahai reborn, but if Benerro came to the conclusion that she is Azor Ahai, he would be in clear contradiction to Melisandre, who in turn might be a rebel within the church. There is much and more to learn about the cult of R'hollor, and so far we only tipped at the surface.

Concerning Tyrion, this chapter is just another one that seems only to flow by. There doesn't really happen something of importance, and the confined quarters of the ship and the dull companions along the way make for few interesting conversations. In fact, Tyrion is still like a leave in the wind, being dragged through the world first by Illyrio, then by Connington, now by Jorah. He is in a retarding moment, waiting for catharsis, but it won't come before he is forced in initiative when the plague breaks out in the slaver's camp. Until then, he will continue to let his moves be dictated, and we will watch him on his odyssee through the eastern waters.

However, the chapter reveals a first step towards Tyrion's catharsis in the person of Penny. The dwarven girl is naive and utterly helpless, and Tyrion takes her on as his responsibility, which despite all his rejections of the notion she is. She eventually helps him to get back to his proper form and to take life in his own hands, not on purpose, but as a byproduct. Besides that, she is one of the more interesting characters surrounding Tyrion at this stage.

As to side notes, Tyrion gets a bit of his humor back when he mocks the chant of the red priests with his "bla bla bla some more" line, which is rather funny. Second, it is interesting that Tyrion states that he certainly is a kinslayer and would answer to the accusation as a kingslayer as well. Does he want to build up some anti-Tywin-credibility for his meeting with Dany? Or has he just been taking some strange fun in confessing a sin he didn't do, to wex the world and Jaime?

Email ThisBlogThis!Share to TwitterShare to FacebookShare to Pinterest
Labels: Tyrion 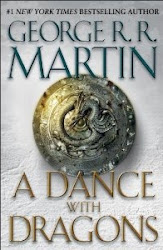